Space Is The Place - page 2

This second page of my Space Is The Place website carries on with descriptions of my visits to various space centres over the years. The third , fourth, fifth and sixth pages display some of my models of historic spacecraft and launch vehicles. Click here to return to the home page.

On this second page are descriptions of my visits to the following space centres over the years: 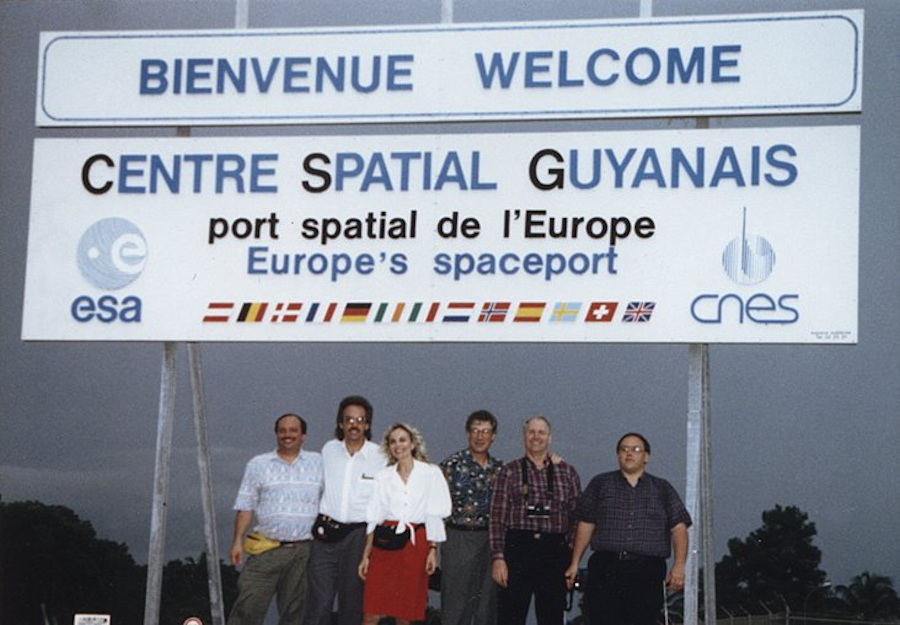 In November of 1993 a group of six of us flew to the South American colony of French Guiana (see map for location), which is on the northeast coast of the continent in the Amazon basin, a country cut out of dense jungle, to see the launch of an Ariane rocket. We witnessed the successful launch of Ariane V-61 (an Ariane 44LP rocket) at night, which placed two satellites into orbit.

In the photo at left the six of us are underneath the sign at the entrance to the space centre (left to right: Ken Harman, the late Ron Caswell, Linda Thomas, Richard Tonkin, Bob McCullough, the late Butch Head). The logo for "ESA", the European Space Agency can be seen on the sign, as well as the logo for "CNES", the French space agency. Kourou was then the busiest commercial spaceport in the world, launching a large number of telecommunications, weather and imaging satellites.

Ariane rocket in its assembly building (click to enlarge) 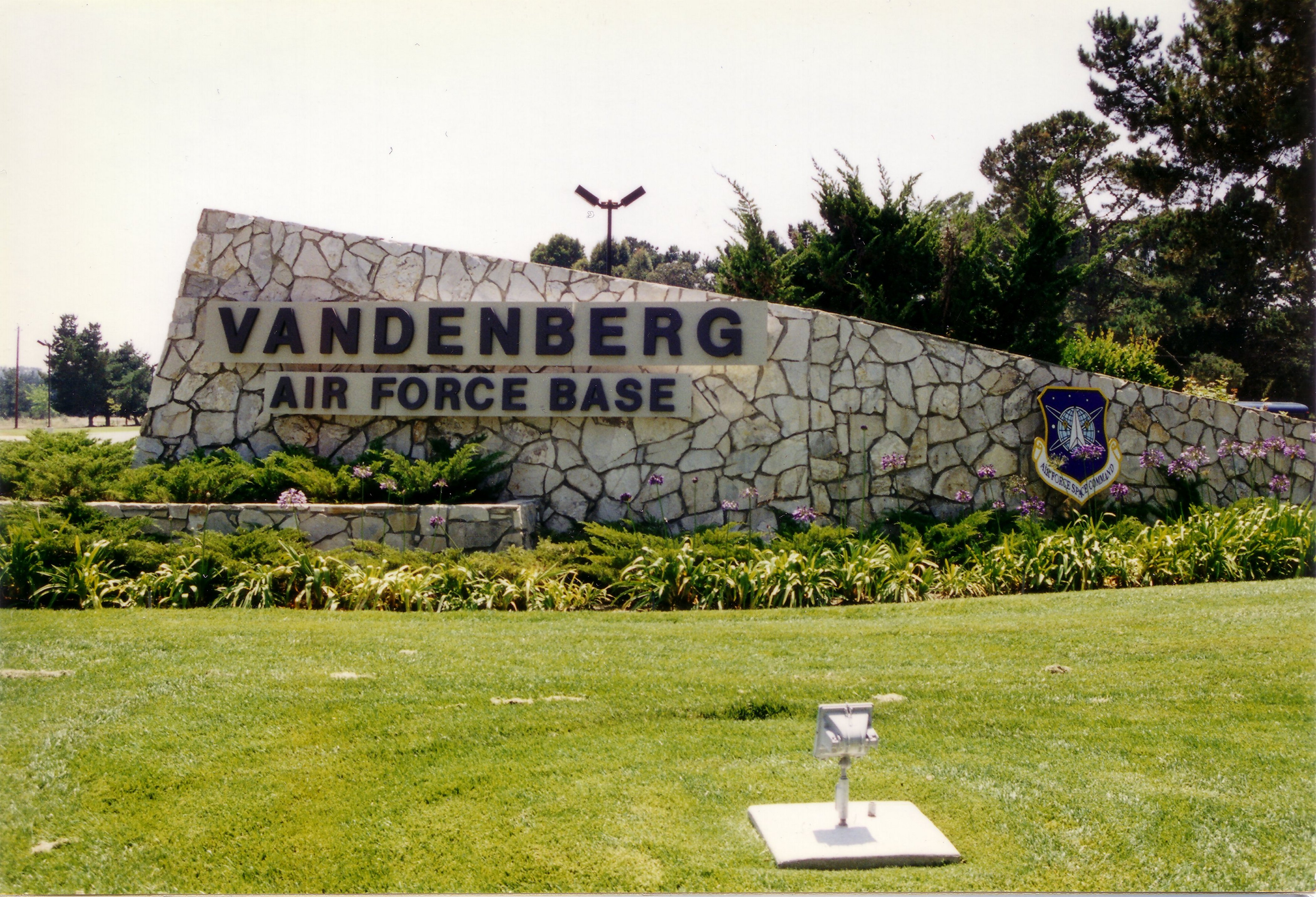 In July 1996 I drove down the west coast from my home in Vancouver Canada to tour several space-related facilities in California. One of the highlights of that trip was a visit to America's busiest spaceport, Vandenberg Air Force Base near Lompoc California, just north of Santa Barbara on the coast (see map for location). With open ocean if launched straight to the south, this is a military installation from which many spy satellites are placed into polar orbit. A polar orbit is best for overflying most of the Earth's surface in a relatively short period of time (as the Earth rotates below at 90 degrees to the satellite track), which is important for reconnaissance missions. Once again, I am very glad I took this tour when I did because this facility had never, so far as I am aware, been available for public tours before this time (1996) and now, in this post-911 world, I expect it is closed to the general public once again.

Vandenberg played a hugely important role in the development of spaceflight technology that is rarely recognized. It is the site from which the Corona program satelittes were launched, the first American spy satellites which flew under the cover of the US Airforce's Discoverer scientific satellite program. The first successful return of anything from Earth orbit took place on the test flight Discoverer XIII launched on August 10th, 1960 - an American flag, which was subsequently presented to President Eisenhower.

Startng on the next mission, Discoverer XIV launched on August 18th 1960, the Corona program began to live up to its potential, returning hundreds of photos of the Soviet Union - more photos returned from that one mission than had all 24 U-2 missions over the USSR to that point combined. This one mission revealed 64 previously unknown Soviet airfields and 26 new surface-to-air missile (SAM) sites. Of course, none of this was known at the time and did not become public until the Corona Program was declassified by Executive Order of President Bill Clinton in February 1995.

From the perspective of the intelligence community and the White House, the success of the Corona mission 9009 (i.e., Discover XIV) could not have come at a better time, coming as it did only three and a half months after U-2 flights over the Soviet Union had effectively been shut down following the shooting down of Francis Gary Power's U-2 over the USSR on May 1st, 1960.

The first three photos below are of the infamous "Space Launch Complex 6" (SLC 6), popularly known as "Slick 6". This complex was re-configured in the early 1980s into a pad to launch the Space Shuttle into polar orbits on covert military missions. However, in the aftermath of the Challenger accident, in the late 1980s this plan was abandon in the interests of safety and the Air Force's decision to use large expendable boosters to launch their spy satellites instead of the Shuttle. This was the second time this complex had been "mothballed" as it was originally built in the mid-1960s to launch the Manned Orbiting Laboratory (MOL) on top of the huge Titan IIIM rocket. The MOL program was to be the USAF's manned military space program, but it never flew a mission before it was cancelled in 1969. Slick 6 was infamous by the late 1990s as billions of dollars had been invested in the facility without it ever having successfully launching a single space mission (this is no longer the case as it was later refurbished for the Delta IV launch vehicle family).

The building in the photos below with the flag and "USAF" painted on its side is mobile! - the pad where the Shuttle was to sit is stationary, and the protective building moves towards it down a track to encompass it. It is difficult to judge the size of this building, but in the top photo if you look closely to the right of the building you will see a panel truck. Note that it is less than half the size of any one of the letters in the "USAF" painted on the side of the building. 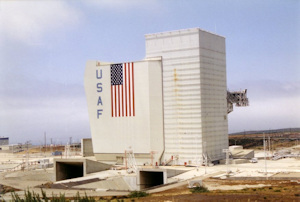 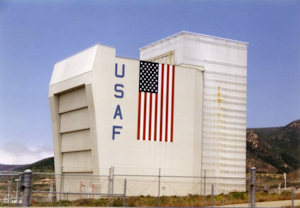 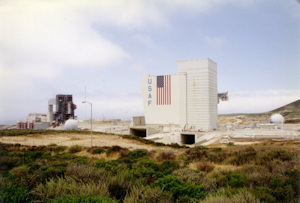 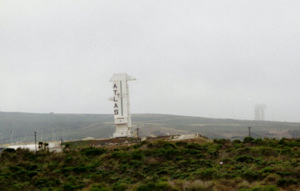 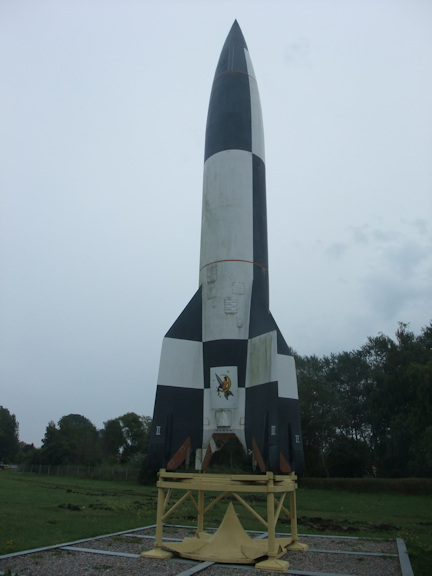 In June of 2009 and again in September of 2015 I was fortunate to visit Peenemunde on the Baltic coast in northeastern Germany (see map for location), which was the site of the development of the "A-4" rocket, better known as the "V-2", the first large ballistic missile which was developed during the Second World War by the team led by Dr. Wernher von Braun. The V-2 is arguably the most important development in the history of rocketry, since subsequent rockets developed after the war by the two superpowers, both the USSR and the USA, can trace their heritage very directly to the V-2. In fact, many American vehicles developed in the 1950s and 1960s (e.g., the Redstone, Jupiter and Saturn series) were designed by von Braun's team, culminating in the Saturn V which took the first men to the Moon at the end of the '60s.

Peenemunde is an isolated (as is appropriate for the development of weapons) fishing village, and it remains today small and distant from large centres, taking about half a day and 3 trains from Berlin to reach. When I first visited in 2009 few people spoke English in what was formerly East Germany - if there was a second language it was more likely to be Russian. The town's main attraction is the "Peenemunde Historisch-Technisches Informationszentrum" (i.e, "the museum"). It is housed in the only original building left standing from the 1936-43 period, the massive powerplant (coal into electricity). Much of the original power generation equipment is still there, if very rusty looking. The main, permanent exhibit is the best and most detailed description of what went on here I have seen anywhere (I guess you'd expect that) and how it fits into the subsequent develoment of rocketry. The technical challenges faced in developing the first large ballistic missile (e.g., propulsion, guidance, etc.) and the solutions they came up with to overcome these obstacles are truly impressive, and variations of many of them are still in use today.

More than any space museum I have ever seen there is an ethical spin to this one - it repeatedly poses the question about the technology developed here - has it benefitted mankind or not? The museum also does not pull any punches about the darker side of those years - the slave labour employed both here and after the 1943 bombing in the manufacture of the A-4 (V-2) in Mittlewerk-Dora (click for photo of V-2 engine in tunnel) in the Harz Mountains, which I visited in 2015. It outlines von Braun's NAZI connections and notes that, while he may not have been an enthusiastic supporter, he was at the very least an opportunist. Interesting spin on this history, especially given that it is in what used to be the GDR (East Germany).

Peenemunde is the site from which the first man-made object was launched into space ("space" was some years later defined as beginning at an altitude of 100 kilometers, or about 62 miles). This was the first successful launch of the A-4, number "V-4" (click for photo of the A-4 V-4 launch & the graphic between its tail fins), which was launched on a ballistic, non-orbital path, on October 3rd, 1942 - exactly 15 years and one day before the first artificial Earth satellite, Sputnik, launched by the USSR on October 4th, 1957. A very large 1/16 scale model (from the Imex V-2 kit) of this historic A-4 V-4 now hangs in my kitchen with this same "girl on the Moon" graphic on it. This was my first home-made waterslide decal.

More information on the V-2 can be found in the section on its model on page 3. 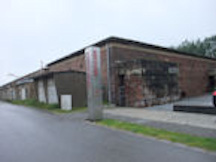 entrance to Peenemunde museum (click to enlarge) - formerly a blockhouse 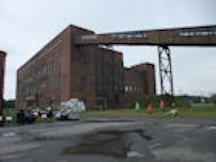 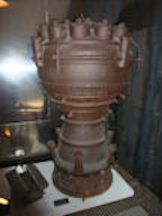 V-2 engine at the Peenemunde museum (click to enlarge) 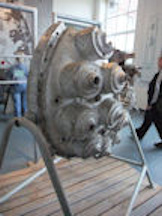 When I returned to Peenemunde in September 2015 it was as part of a German Rocket History tour of about 50 people sponsored by the British Interplanetary Society and led by historian Dr. Andrew Thompson. This time we were taken inside the heavily forested prohibited zone to the very spot where the first rocket to enter space was launched on October 3rd, 1942. On this tour I was reunited with two friends and fellow veterans of the 1992 Russia tour, Bob McCullough and Arthur Schoeters. 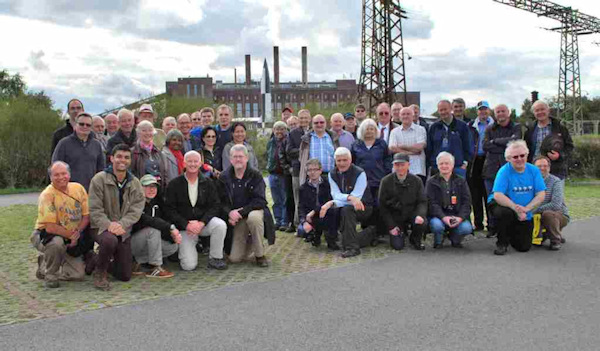 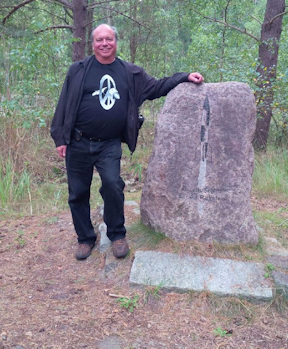 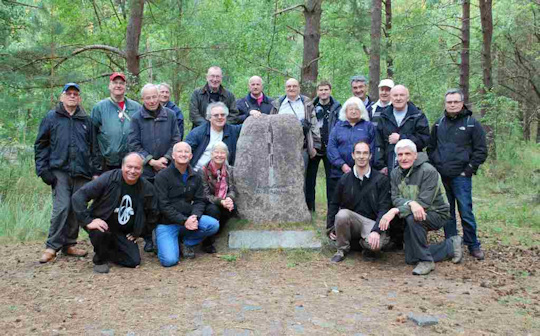 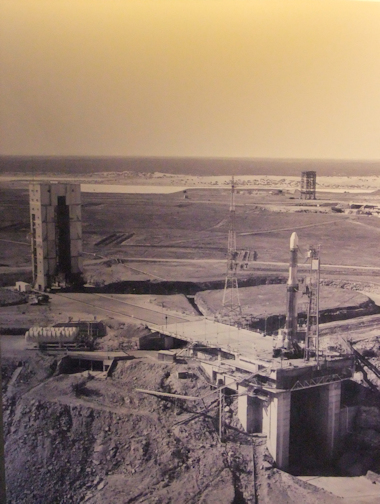 In September of 2017 I attended the International Astronautical Congress (IAC) meeting in Adelaide, South Australia, along with my friends Bob McCullough of Big Rapids Michigan and Richard Tonkin of Smith's Gully, Victoria, Australia. In conjunction with the IAC an optional day trip took 30 of us into the Austarlian desert to the Woomera Test Range (see map for location), still an active military installation and formerly the site for the launch of a number of satellites. Australia became only the fourth nation to launch a satellite from its own soil when Wresat was launched from Woomera on November 29th, 1967. Woomera was also the launch site for the Europa rocket, an early joint venture of a number of European nations along with Australia.

It was about a one and one-half hour flight from the Adelaide airport in a propeller driven plane into desert in the Northern Region of South Australia to Woomera. While there is a small museum in the town and a community rocket garden, because the Woomera Test Range is still an active military test range we were cautioned upon arrival in no uncertain terms that photography in any form within the gated test range was strictly forbidden. Thus, unfortunately, I have no photos of the impressive sites we saw in Woomera. In particular, we saw the huge now abandoned Launch Area 6 pad from which the Europa rocket (see photo left) was launched. We also visited the site from which the first Australian satellite to reach orbit, Wresat, was launched. 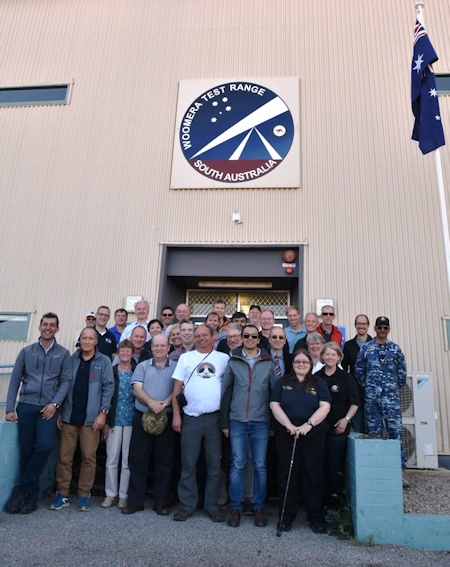 Click here to continue on to the third page which displays a number of my models of spacecraft and launch vehicles and outlines some of the history behind them. This continues on the fourth, fifth and sixth pages as well. Click here to return to the home page.

This page will change and evolve over time, so check back periodically. I welcome any questions or comments and can be contacted at: